Czechs Open School in Remote Region in the Himalayas 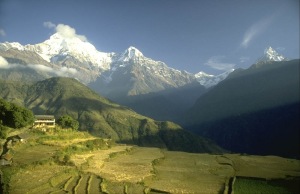 Even the far corners of the world appreciate help in providing good school ~ Himalayas.

In a feat of extraordinary planning and dedication, Czech volunteer enthusiasts have finished building an elementary school in the village of Kargyak, which lies in one of the most remote regions of the Indian Himalayas.

The idea to build the school hatched in 2003 in the mind of Jan Tilinger, a civil engineer currently completing his doctorate degree at the Czech Technical University in Prague, who submitted his plan for an ecologically sustainable school in Kargyak as his master’s thesis.

For his doctorate project, Tilinger decided to put his blueprints to practical use. In 2006, he founded the civic organization Surya, aimed at boosting economy and education in Kargyak, a village almost completely cut off from civilization. “The Sun school lies exactly at 4,200 meters [13,780 feet] above sea level,” said Tilinger. “The passes are above 5,000 meters.”

The remoteness of the region and its grand landscapes draw young adventurers looking to dodge the stress of a hectic modern life. Accessing the village from the nearest road requires a minimum five-day hike. In wintertime, the valley is completely blocked off from the outside world by snowed-in mountain passes.

This inaccessibility created unprecedented difficulties for the construction team. “The heaviest machinery we used was an electric drill and a chainsaw,” said Tilinger. “Practically all the material had to be local.

Getting solar panels to the site with yak caravans was exhausting.”
By blending traditional methods with modern technology, Tilinger and his team created a structure that is completely self-sufficient in terms of electricity and heat. “It requires only a few pieces of dried yak dung to heat up in the morning if it is really cold,” said Tilinger. “Otherwise, the sun is enough to heat it to a comfortable room temperature: around 18 degrees [64 degrees Fahrenheit].”

Achieving such comfort took months of hard work. As an illustration, Tilinger said he spent weeks searching for the ideal type of mud to make bricks. “We made almost 4,000 bricks at a small brook some 6 kilometers [3.7 miles] away, and had to transport them by yak to the construction site,” he said.

Each brick weighed 25 kilograms [55 pounds], and each yak was only able to carry six bricks at a time and make six round trips each day. In addition, 10,000 stone blocks had to be quarried by hand, without the use of explosives, from a local cliff, and wood had to be brought from the city of Delhi, about 300 miles away.

Aside from participating in the construction process, volunteers became versatile counsels for the locals. Because helicopter rescue is only available during extreme emergencies, volunteers often took on the role of doctors, said Tilinger. “I had to cut open one villager’s infected wrist,” he added.

However, local difficulties were nothing compared to securing funds from sponsors back home. “Tilinger is a man with dedication and a clear vision. That convinced me to help out financially,” said Petr Sýkora, one of the sponsors, pointing out that even before the school was built, children were taught in makeshift classrooms so that no time would be lost due to obstructions during construction.

Despite the various difficulties, students moved into the new building just before the first snowfall in September. “I’d like to thank the countless volunteers, sponsors and locals without whom the project would have never been completed,” said Tilinger, adding that the real challenge still lies ahead.

Would-be teachers who dare to make the journey to Kargyak face extreme conditions. With only one other European to talk to, cabin fever sets in quickly, said Tilinger. The diet includes almost no meat, as the local population is Buddhist and kills yaks for meat only in wintertime.

Tilinger said he lost almost 20 kilograms during his first year at the site. “We have a psychologist who screens all volunteers,” he said. “We cannot afford for people to break down after they arrive for their six-month tour.”

Although locals realize the importance of education, they can only rarely afford to send their children to distant schools beyond the mountains, and those lucky enough to leave rarely come back. “Our main goal is to educate children locally, so that traditional ways of life are preserved while providing a complete education for the future,” said Tilinger.

To that end, three Tibetans and two European volunteers teach everything from English, Hindi and Zanskari, a local dialect, to computer science and accounting. “When these kids grow up in 20 years, computers will have spread even to such remote regions,” said Tilinger. Currently, the school is equipped with four solar-powered computers.

After nearly five years of working on the Sun School, the fruits of Tilinger’s labor are drawing international attention. At a Nov. 18 international conference organized by the Vienna University of Technology, the Kargyak project beat some 160 other submissions from around the world, including research into computer programming and biotechnology.

However, Tilinger is not one to rest on his laurels. Aside from directing the project in Kargyak, he now intends to expand his know-how to the nearby country of Bhutan. “The kingdom was interested in our sustainable development project and invited us to urbanize three towns using local labor and local materials,” said Tilinger.

The original story first appeared in The Prague Post.