What is poverty, really?

Posted on July 8, 2012 by endangerededen

This story was first published in Anthropelago Blog, where the author, Max Hasan, who was on a short stint in Jakarta, Indonesia, working with Habitat for Humanity, pondered the question of “what really defines poverty?“. I felt it was appropriate to share it here.

The other day, my colleague and I were arguing about the definition of poverty. He claimed that:

“poverty alleviation is an oxymoron. One cannot alleviate poverty simply due to its very nature; poverty is a relativistic concept, thus someone always exists who is going to be comparatively less well-off or impoverished due to the way our economy and society are structured. For example a millionaire could be considered wealthy today, but what about in a hundred years? Will his million dollars still hold the same worth due to factors such as inflation and changes in social values?” 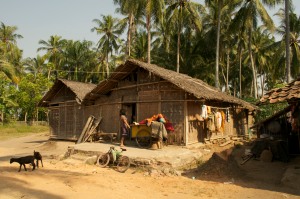 At first, this claim struck and resonated with me. He seemed to be correct. If we take poverty as a relative term, then sure, there will always be a group of people who are perpetually “impoverished”—it all depends on context. However, after much thought and observation, I came to the conclusion that “poverty” is a static and concrete idea, rather than a relative and forever shifting definition. Yes, there can be those who are “poorer” or “less better off,” but poverty strictly describes “those who don’t have the means to attain the most basic human necessities.” Though this definition may seem vague and too far-reaching, that’s precisely what poverty itself is.

Poverty is like a virus or a plague, as it exists, multiplies, and destroys. Furthering the similarities, it is preventable and can be uprooted indefinitely; it’s not something that has to exist.

Several small boys in Cikangkung entertaining themselves with none other than… a live bat. Photo: Max Hasan

Throughout my travels in Indonesia, my conception of poverty, the poor, and who embodies these ideas has changed drastically. On Thursday, June 28, 2012, I embarked on several field surveys within Jakarta Greater Metro Area. These surveys were paramount to my changes in poverty perception. Below, are my notes and observations from the field.

My colleagues invited me on a series of field surveys today. My eyes and heart were opened to the lives of these extremely simple and impoverished people who, despite having no material or financial assets, are still rich. They are rich in life, love, happiness—and all other aspects that truly matter in composing a wholesome and fulfilled life. Though only a couple of hours away from the smog-choked metropolis of Jakarta, these villagers were worlds apart from any city rat.

9:30 AM Cikangkung – Several homes and seven public water facilities were built by Habitat. In January, the area was ravaged by a flood with waters as high as 1.5 meters (5 feet). Homes and public water facilities were built as disaster relief products and thus donated pro bono. There were about 100 families living in the village, several of which had leprosy as a result of bad sanitation and irrigation. Prior to Habitat building these water facilities, villagers had to walk an absurd distance to use a brown, garbage-filled stream for all purposes (washing clothes, bathing, toilet, washing dishes, brushing teeth, etc.). Upon leaving the area we saw mostly naked village boys playing with what at first we thought was a squeaky doll, but upon closer observation, it turned out to be a live fruit bat, screeching and flailing while the village boys laughed hysterically.

To read the rest of the story in Anthropelago, pls click here.